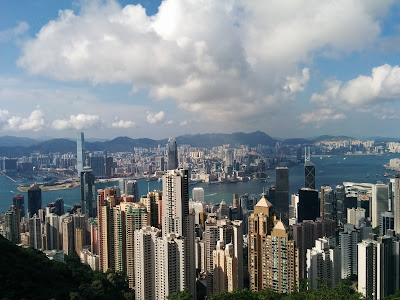 Hong Kong is complicated. It is Chinese and it is British. It is democratic, but in reality, democracy doesn’t exist in China. It has built it’s foundations on the backbone of manufacturing and financial liquidity in China. That foundation is quickly changing with the emergence of Shanghai as a new powerhouse and the Chinese government becoming restless with HK’s divergence from Chinese ideals. As a result, for better or for worse, Hong Kong is being forced to search a new identity it can call it’s own.

Millennials (my generation) in Hong Kong has a lot of commonality with the millennials in the West. We’re all optimistic, idealistic, and perhaps a little naive. Unlike the West, however, materialistic values are alive and well among millennials in HK. Young women crowd cookie cut malls filled with luxury brands, spending money they don’t have to reflect a lifestyle they also don’t have.

Financial stability for a young adult in HK is a dream for most outside of the finance industry. Like New York, power, money and status are king for many. Where a mediocre engineer in Silicon Valley makes 6 figures with no sweat, an engineer in HK will struggle to earn somewhere around $36,000 USD. The tech scene, while immature, is nascent, tight knit, and growing.

Janet and I connected with a local leader, Gilbert, an engineer currently trying to foster the next generation of entrepreneurs. Gilbert is a graduate of HKU and currently working with one of HK’s supposed elite among the startup community. His boss/mentor is a graduate of Y Combinator (YC), the world’s most elite incubator. The average valuation of a startup graduating from Y Combinator is $10M USD and typically commands the respect from the most powerful investors in the world. Although $10M is a drop in the bucket in the grand scheme of things, several $B companies have come out of YC. As a result, YC graduates are seen as royalty within the startup community. Being based in the US, only 4 YC companies have come out of HK.

Gilbert is, in my mind, almost an extreme version of an HK youth. Most individuals optimize for happiness. China is optimizing for long term growth. Growth, whether it relates to an individual or a collective, is often a painful process. As a result, many in HK crave the impossibility of a HK remained untouched. Gilbert is no exception. He sees strife among Chinese youth where lack of financial freedom and individual rights are the norm. He is afraid of HK’s prosperity handed out and diluted in the giant that is China. He isn’t sitting on his hands either. He’s been holding classes teaching people how to program there seems to be a craving for it because his classes are packed. It’s the same kind of grass roots movement that arguably makes Silicon Valley such a special place.

When the US split from British rule, Americans enjoyed freedom and liberty. Canada, in turn, received law and order. The mentalities of an American and Canadian are completely different. They pervade everything from social policy to business culture. The same contrasts can be made between the US and HK. HK’s British influence is still alive and well. For example: while in a mall, you cannot sit on the side of a fountain or chew gum. The thinking would be something along the lines of “we are unwilling to let society descend into chaos; there will be order". In the US, there is nothing more sacred than the concept of a rational individual and his/her rights. Like Canada, there is also an undertone of elitism. Most Canadians think they’re superior to Americans as our issues are somehow less severe than our US counterparts. Most HK citizens think they’re superior to China but for differing reasons. If you go to a city in China, people are loud, horking of spit is everywhere, individuals will invade your space to get ahead in line. By Western standards, the Chinese are vulgar and HK lives by the same values. There’s a certain irony in it. HK’s way of life was made possible entirely because of China.

Historically, because of cheap manufacturing in China, it has positioned itself as the broker between China and the West. China is increasingly becoming autonomous and so HK runs the risk of becoming increasingly irrelevant. There is a potential saving grace that exists a few subway stops across the Chinese border: Shenzhen. 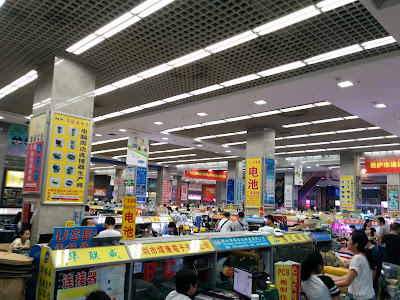 Engineers in Silicon Valley gush about the electronics wonderland that is Shenzhen. In North America, if you want to prototype a product, you must place an order online and wait a week to get your parts. This slows down the engineering lifecycle greatly. In Shenzhen, you simply have to go on WeChat (a texting app), or walk down the street to get your parts. In North America, it is impossible to manufacture electronics cost efficiently. I cannot think of a single Silicon Valley firm that manufactures anything locally.

Shenzhen is Chinese through and through. Right beside the electronics parts vendors, that are ushering the world into the future, are kids running around who’s parents watch them carefully. People hork spit just the same. The juxtaposition of the Chinese way and cutting edge technology seems like a metaphor for China’s place in the world’s tech future. China is going to things it’s way, the world be damned. 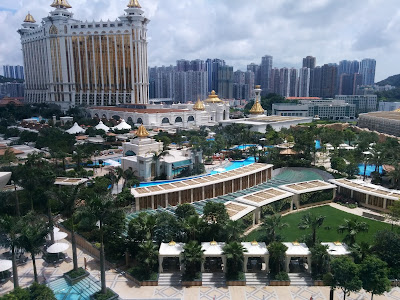 Another ferry ride away is Macau, China’s Las Vegas. While playing poker, we meet a few traveling lawyers specializing in tech litigation. They’re US based and uninterested about China’s tech future. They’ve some got reason to be uninterested; the US is the undisputed leader. But with the emergence of giants like Alibaba and Tencent, it seems like the US’s monopoly on tech has come to an end.

Gambling in China is very different from the West and it runs deep in the Chinese way of thinking. In the West, the concept of earning money and your way into the world is the norm. The Chinese, however, believe in fate. 90% of gambling in Macau is done playing a game called Baccarat. Baccarat was a game thought to be invented by the Italians. One simply places a bet and has zero control over whether you will win or lose. If you are fated to win, you will win. Statistically, like most casino games, your expected value is just under what you bet so the house always wins in the long run.

Poker, unlike Baccarat, is a game of skill and so it has next to no popularity in Macau. Walking through 4 casinos, you may find poker rooms, but they’re usually empty. On day 2 of our trip, we found a poker room at The Venetian which had a large number of players. Because poker’s popularity is low, the casino enforces high stakes. The lowest stakes we found were 25/50 HKD, equivalent to Las Vegas’ third tier of play and approaching professional stakes. Usually, you want to play with 100x the big blind, which meant I had to buy $5000 HKD (almost $1000 CAD). It’s normally 5x what I’m used to playing. Normally at these stakes, the players are usually way above my skill level.

That said, in Macau, there are a lot of egos and belief in fate. The poker competition seems to be mostly Chinese factory owners who liken themselves to Harvard graduates. Combining my cautious play and their egos, I take out two players with ease and earn a significant amount of money.

Macau isn’t quite Vegas, but it’s getting there. There are a few smaller casinos with a distinct rural Chinese flair: Soviet era colour themes, smokey rooms, and less than glamorous wear. In the wake of the Chinese crackdown on government corruption, apparently Macau has felt it's revenue numbers go down. It certainly doesn’t look like it.

Popular posts from this blog

June 30, 2017
When I was but a wee lad, I dreamed of being a janitor for NASA. There's just something awesome about playing a part, no matter how small, of something that dares to push the world forward. While I no longer hold my old lofty dreams of working for NASA, I have had to recently look for jobs. For whatever contrived reason, the conventional thinking behind how people should search for jobs falls under two categories: networking and job sites. While those approaches work, a very useful metaphor for how you might view yourself is that you're a business. You sell your product (your time) for a salary (your revenue). You might argue, most wages in the western world are $20,000 USD to $500,000 USD. If you're a business, then it's probably also helpful to think about selling your product (time) like a business. Typically, different price points in business dictate different sales and marketing techniques. Below say, $10 a month, direct sales (sales where you sell to people
2 comments
Read more

May 23, 2017
There once lived a wise, middle aged, bald prophet named Marc Andreessen. His job, was to profit from prophecy. Today, he is one of the most well known, and respected, venture capitalists in the world. He is famous for some of his sayings such as "if you want to see where a bubble is forming, follow the MBAs" in reference to the MBAs going to Wall St during the mortgage backed securities crisis of 2008 and the dot com bust in 2002. Arguably, his most famous saying is/was "software is eating the world". Today, it's a foregone conclusion that, software has broken the way a lot of industries fundamentally operate. I think it's particularly interesting, however, to think about what that means for marketing. I'm of the opinion that, very few companies really understand what they're doing and that modern marketing should not only look like engineering... it should be engineering. One way to think about marketing is that there are two key components to ma
Post a Comment
Read more

Superficial impressions of business in China

June 03, 2016
I’m walking down a residential street in Tianjin. Food vendors hustle their wares for dirt cheap prices. A whole Peking duck for $3.80 USD? Sign me up for that! As I bring my spoils back to my girlfriend’s apartment, I can’t help but feel like I’m caught back in time while the rest of the country is moving in fast forward.  I’m on my computer looking at valuations of companies in the healthcare/pharmaceutical space. $500M here, $300M there. Whatever your conceptions of speed or size are in the Valley, I assure you, they have nothing on China. The game being played in China is big and aggressive. And Clay Christensen’s “Innovator’s Dilemma”? Nowhere to be found. Alibaba does everything from B2B sales to B2C pharmaceuticals. Big companies just aren’t slow here. What about the startups? Even more fast and furious.  As a foreigner, China is a daunting place. Almost every perception of what you think you know about doing business basically doesn’t really apply here. In the Valley,
3 comments
Read more